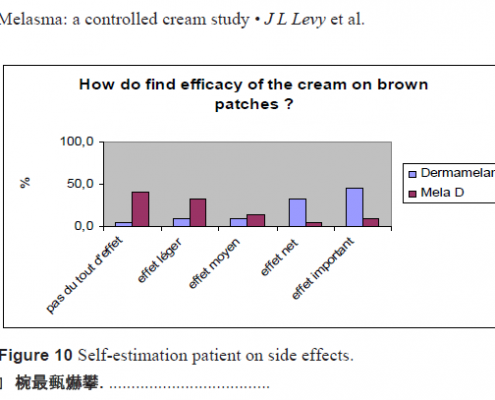 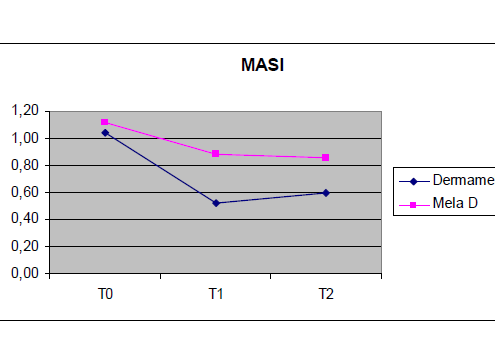 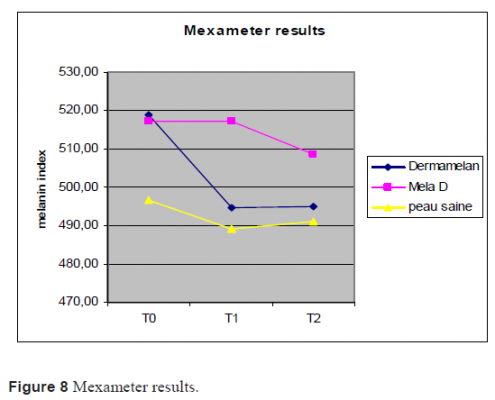 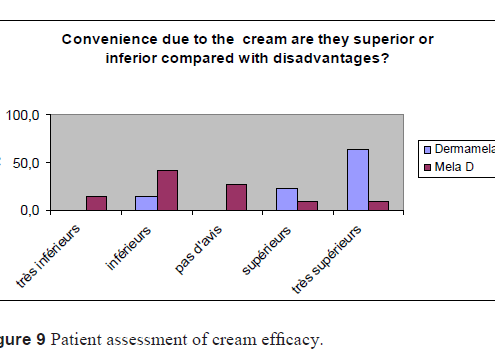 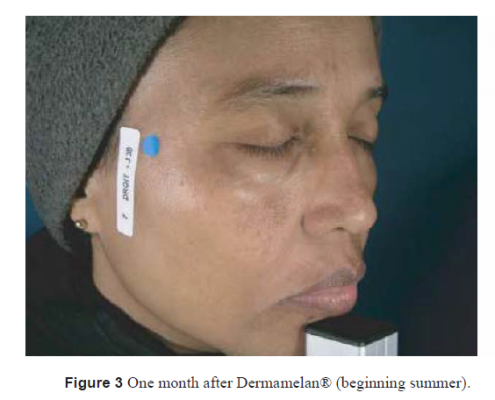 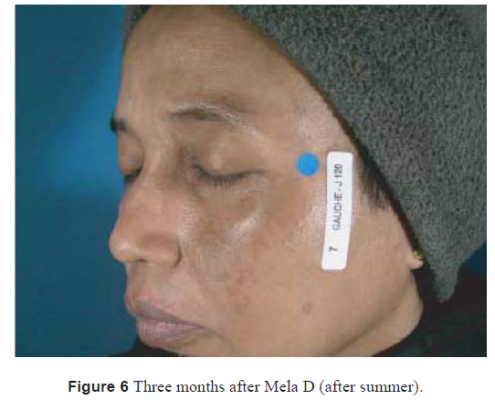 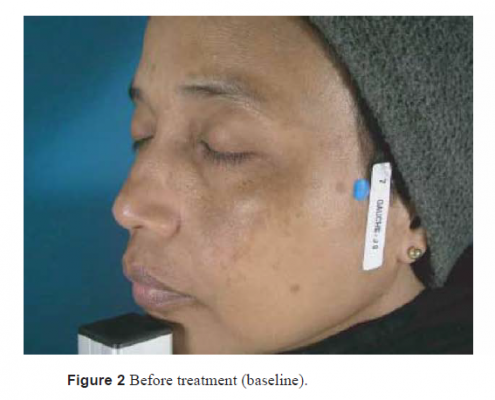 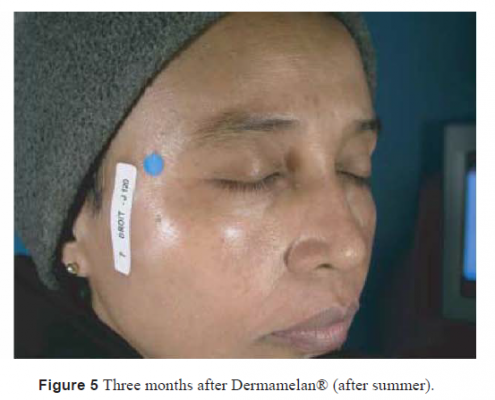 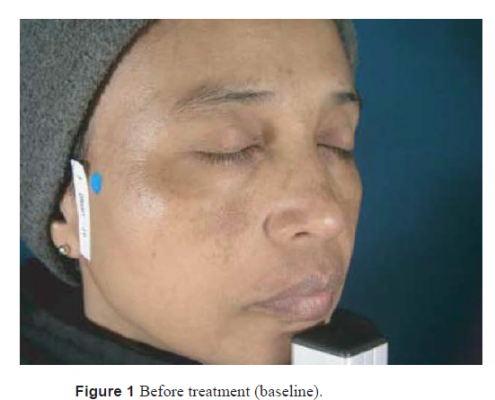 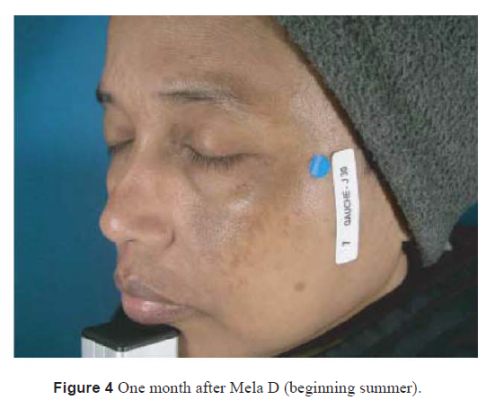 Summary Background Melasma is an acquired hypermelanosis predominantly affecting the face of women. It is often recalcitrant to treatment with hypopigmenting agents. Objective To assess the efficacy of a nonhydroquinone cream (Dermamelan®) vs. another (Mela-D®) as treatment for melasma. Methods Twenty-two French women with bilateral epidermal and/or mixed melasma were enrolled in a split-faced prospective trial lasting 4 months during summer season weeks. Twelve patients applied once-daily Dermamelan® to one side of the face with sun-protective factor 60 UVA sunscreen each morning and Mela-D® once-daily to the other side of the face. Pigmentation was measured objectively using a mexameter and the melasma area and severity index (MASI) were measured subjectively. Results The mean decrease of pigmentation was statistically significant on the MASI with both cream and only with Dermamelan® with the mexameter.
Some adverse side effects were observed. Conclusions Dermamelan® is really more effective than Mela D® cream on melasma. Even though some side effects were observed patients preferred the Dermamelan®-treated side.

Melasma, a common pigmentary disorder characterized by the development of enlarged hyperpigmented patches, occurs mostly in women. The distribution of hyperpigmented macules is limited to the areas of the face (centrofacial, malar, or mandibular) and can have severe adverse psychoemotional effects on affected individuals.1 The cause of melasma is multifactorial and includes
pregnancy,2 sunlight exposure, hormone therapy,3 cosmetic use,4 and racial or genetic effects.

Conventional treatment for melasma includes elimination of any possible causative factors coupled with use of a sunscreen and hypopigmenting agent, often in combination with other therapies, such as tretinoin, kojic acid, azelaic acid, or superficial peeling.5–7 Hydroquinone (HQ) preparation or cosmetic cream has shown to be effective in different studies.8–11 HQ use is not approved in Europe where this study was performed.12 Instead, two non-HQ creams were selected: Mela D® (Mexoryl SX®, kojic acid, Lipohydroxyacid® LHA) and Dermamelan® (Kojic acid, phytic acid, buthyl methoxydibenzoylmethane) cream.

The objective of this randomized controlled study was to assess the efficacy and safety of this new topical cream Dermamelan in treating facial melasma in all Fitzpatrick skin types.

Eligibility criteria
Patients with a clinical diagnosis of symmetric melasma of the face with Fitzpatrick skin types I to VI were recruited for the study. The intensity of melasma was sufficient to be observed clinically and on visible standardized photography.

Exclusion criteria
Exclusion criteria included exposure within the 6 months prior to the study to a topical corticosteroid, bleaching agents or history of chemical peels, microdermabrasion, or facial laser treatment within 9 months prior to the study. Further exclusion criteria included treatment with oral systemic corticosteroids or retinoids within 6 months of study, or other systemic photosensitizing drugs within 6 months. In addition, patients who would require concomitant topical therapy that would interfere with the  study participation in an investigational study in the previous 30 days or patients who were immunocompromised were excluded. The use of oral and nonoral contraceptives was permitted.

Study design
Patients applied Dermamelan® (Mesoestetic, Barcelona, E) once daily to the involved half face and Mela D® (Kojic acid/Mexoryl XL® and LHA®, La Roche Posay, Paris, France) on the other side of the face for the 16-week study period. Patients were instructed that skin care during the study could consist only of a specific moisturizer and cleanser with a sun protection factor 25 UV-B sunscreen (Mesoestetic, Barcelona, E) to be applied to both sides of the face in the morning at least 15 min after applying each study cream. There were no special instructions to avoid
the sun. The patients underwent a baseline evaluation, including an initial examination. They were assessed at week 4 during summer, and week 16 after summer.

Clinical evaluation
Standard and UV photographs (UV-DA, Clearstone, Mediform, Barcelona, E) for the clinical examination were recorded at baseline and at weeks 4 and 16. The assessment was made with photographs taken at baseline. Both patients and physicians assessed improvement from baseline, using a five-point scale at each follow-up visit (resolved, significant improvement, slight improvement, no change, or worsening). The MASI score is an index used to quantify the severity of melasma and changes during therapy. The index was modified by Kimbrough

Green et al. T5 he MASI is calculated based on the percentage of relative surface of involvement (A), the intensity of darkness (D) of melasma, and the homogeneity (H) of the hyperpigmentation. The right cheek region (rc) corresponds to 30% of the total face. The same regions are measured on the left side, giving a total facial surface area of 100%. The area of involvement, in each of these two areas is given a numerical value of 0 –6 (0 indicates no involvement; 1, 0–9%; 2, 10–29%; 3, 30–49%; 4, 50–69%; 5, 70–89%; and 6, 90– 100%). The intensity of darkness (D) and the homogeneity of melasma (H) were rated on a scale from 1 to 4 (0 indicates absent; 1, slight; 2, mild; 3, marked; and 4, maximum). Finally, the MASI score is calculated by adding the sum of
the severity ratings for darkness and homogeneity, multiplied by the value of the area of involvement for each cheek area. We used the same measurement method as Hurley et al.7 Adverse events were assessed at all visits. The investigator graded irritation at each visit, using both objective (erythema, scaling/peeling, edema, eczema, or irritation) and subjective (burning, itching, dryness) measures on a five-point scale (0 = none, 1 = minimal, 2 = mild, 3 = moderate, 4 = severe).

Objective assessment
The Mexameter (Courage et Khazaka, Germany) provides reproducible, objective measurement of pigment (melanin) based on the absorption spectra of light and has an accuracy of ±5%. Mexameter readings were obtained, and a linear analogue scale was marked at baseline and at weeks 2, 4, 6, and 8 and on both the target lesion and normal untreated skin.

On the Mela D®-treated side, the Wilcoxon test performed on Mexameter results (Fig. 8) demonstrated a nonsignificant decrease in the degree of pigmentation between T0 and T1 (P < 0.45) and a significant decrease between T0 and T2 and between T1 and T2 (P < 0.01). Finally, when we applied the Wilcoxon test at each time between on pigmented area treated with Dermamelan® and Mela D®, we observed a statistical difference between Dermamelan® and Mela D® (at T1 P < 0.0001 and at T2 P < 0.005). These results emphasized the superior efficacy of Dermamelan® over Mela D®.

The side effects were found included irritation and dryness
of the skin in 18.2% with Dermamelan® and 4.5% with
Mela D®.

Discussion
Melasma is a readily apparent potentially disfiguring condition that often causes the patient great emotional distress and can affect ordinary functioning at work.1 We designed a double-blind randomized study to confirm the dramatic efficacy that we observed in current practice with the Dermamelan® since 1999. Both creams do not contain natural or chemical HQ. We chose to treat each hemiface at random with both Dermamelan®and Mela D®.We evaluated the bleaching effect on standardized normal lighting photographs (MASI). The UV digital photographs were used to evaluate the area of pigmentation and to control the normal lighting photographs. The Mexameter served as a reproducible, easy to use tool for the objective measurement of pigmentation.

We observed a quicker and higher efficacy with Dermamelan® compared with mela D® on facial melasma on all skin types. Both creams generated statistical differences with MASI evaluation and Mexameter measurement. However, the Mexameter results showed a greater bleaching effect with Dermamelan® than Mela D®. On the satisfaction and tolerance test with each cream, it
was noticeable that even though Dermamelan® led to increased skin irritation, 100% of patients chose efficacy before skin acceptance (Figs 9 and 10). Even though skin acceptance is less with Dermamelan®, the PS 24 test confirms that patients preferred efficacy over tolerance. All the patients included in the study had a melasma on a cheek and sometimes more extended on the face.

The study was specifically conducted during summer. We waited until the melasma was tanned with the normal sun exposure in Marseille to begin the study on May 15. The study was concluded on September 15. All the patients are comparable in the group regarding the pigmentation before study and diagnosis of hormonal melasma. The patient was never asked to modify their normal way of life. We did not request that patients avoided sun exposure, but to use sunscreens. Sunscreens block, especially in summer and on dark skin, protected only from a small amount of UV(13) Sunscreens are most efficacious on phototypes I and II. For melasma, they give a good protection during October to March.(14)

Different studies have shown that it was possible to bleach significantly a facial melasma on different skin types.5,6 Moderate cutaneous side effects of erythema and desquamation occurred with tretinoin. We observed the same side effects with Dermamelan® with a quick and high degree of clearing effect.

Hurley et al.7 proposed to use a glycolic acid peel comparatively with HQ only on a uniform population of facial melasma. They found no significant difference in the degree of improvement using HQ alone vs. combination therapy with HQ and glycolic acid peels.

HQ alone, in combination with topical agents or priming acid peels, appears as the first depigmenting agent for facial melasma.

In Europe, HQ is not approved for cosmetic prescription.(12) We use the HQ-free Dermamelan® vs. HQ-free Mela D® as depigmenting agent. Dermamelan® appears as a strong bleaching cream.

Conclusion
This study concluded that Dermamelan®cream demonstrated a quick and high degree of efficacy during summer. Even if Dermamelan® cream is less tolerated than Mela D ®, patients preferred efficacy. D therefore appears to be a very effective treatment for melasma.

2 Abarca J, Odilla Arrollo C, Blanch S, Arellano G. Melasma in pregnancy: reduction of its appearance with the use of a broadspectrum photoprotective agent. Med Cutan Ibero Lat Am 1987;
15: 199–203.